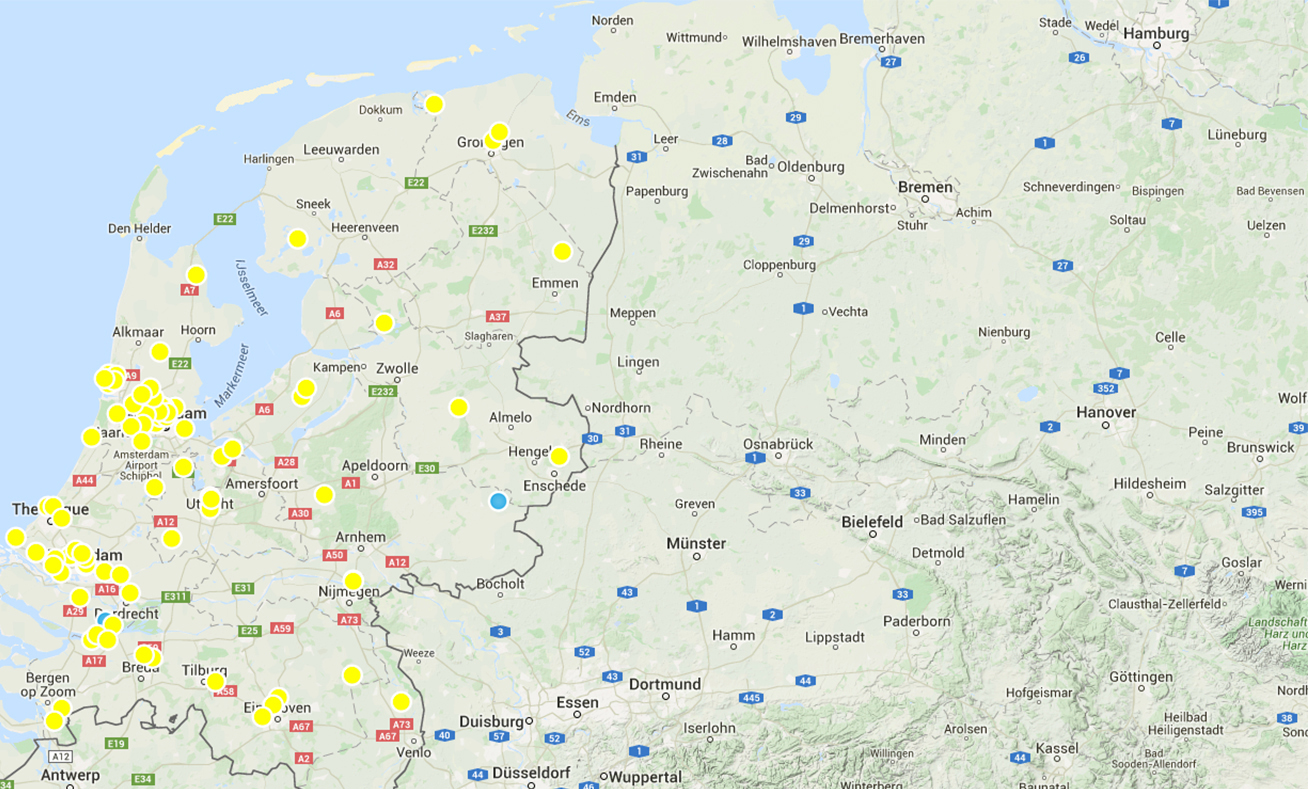 The introduction of an app

On 23 September 2015, the then State Secretary Wilma Mansveld (Infrastructure and the Environment) launched the renewed air quality app. This app allows everyone to monitor the air quality of the location where they are and whether it is wise to adjust their pattern of activities. This is especially important to people who are sensitive to air pollution, such as those suffering from a pulmonary disease.

The basis for the Air quality app is the national air quality monitoring network that was established in the 1970s. In those days, air pollution detectors were used, which today have been replaced by fully fledged measuring stations. In addition to the national monitoring network, DCMR and the  Public Health Service of Amsterdam (GGD Amsterdam) use their own network. All of these data are included when measuring the air quality. Using a model, a national image can be provided.These measuring data do not indicate whether people can experience health effects due to the air quality at the location where they are. In order to be able to indicate anything about this, RIVM has developed an index in collaboration with the Municipal Public Health Services. Based on the content of three substances in the air (ozone, nitrogen dioxide and particulate matter), this index indicates the extent to which people can experience health effects caused by the air quality. The expected air quality for the remainder of the day or the next day is important for the provision of an action perspective. To this, the expected air quality is measured using a model developed by TNO, KNMI and RIVM. The Air quality app, which is suitable for smartphones and tablets, has been developed to make all of this information accessible for everyone in the Netherlands.

How does the app work?

The app is informed of the user’s location and indicates the air quality in that neighbourhood at the time in addition to a forecast of a few days, taking into account the concentrations of ozone, nitrogen dioxide and particulate matter in the air. The app also takes into account the air around motorways and national main roads. Quality is expressed in a figure between 1 and 10, and is judged as good, moderate, insufficient, bad to very bad. Depending on the air quality, the app provides advice about what is the best option for the user if he/she is sensitive to air pollution. It may, for instance, be wise to take an alternative route, to choose not to ride a bike or – worst-case scenario – to stay in for the day. App users can also set a smog alert to receive a notification when the air quality reaches a certain level.

The app has been developed by order of the Ministry of Infrastructure and the Environment, DCMR Milieudienst Rijnmond (environmental department), RIVM, GGD Amsterdam, Omgevingsdienst Midden- en West-Brabant and the province of Limburg. The Longfonds (lung fund), Milieudefensie (environmental protection) and the IRAS institute of Utrecht University have also collaborated in the app operation advice.

Back to projects and reseach