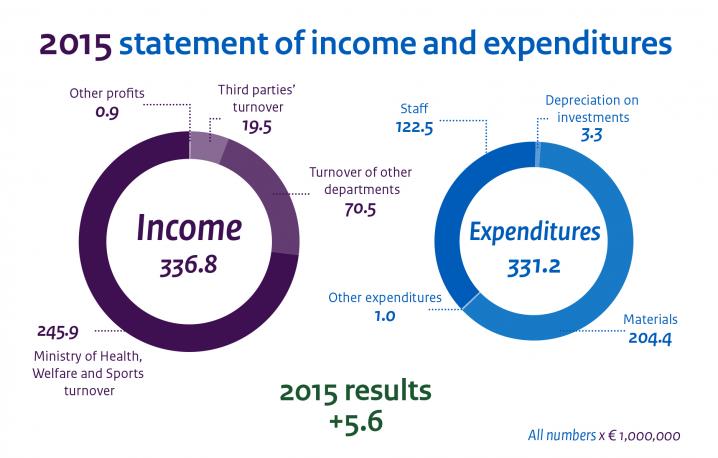 In 2015, RIVM achieved a positive result of €5.6 million, which can be represented as follows in the above statement of income and expenditures (profit-and-loss account):

The expenditures (costs) required for the carrying out of these assignments are partly staff and partly material. In late 2015, 1,487 FTE employed by RIVM worked on assignments provided by clients. The material expenses represent items such as rent for buildings, in addition to RIVM’s deployment of other implementation organisations and the purchase of vaccines.

The positive result RIVM realised in 2015 will be for the benefit of the exploitation reserve. RIVM steers towards a balanced budget (has no profit motive). 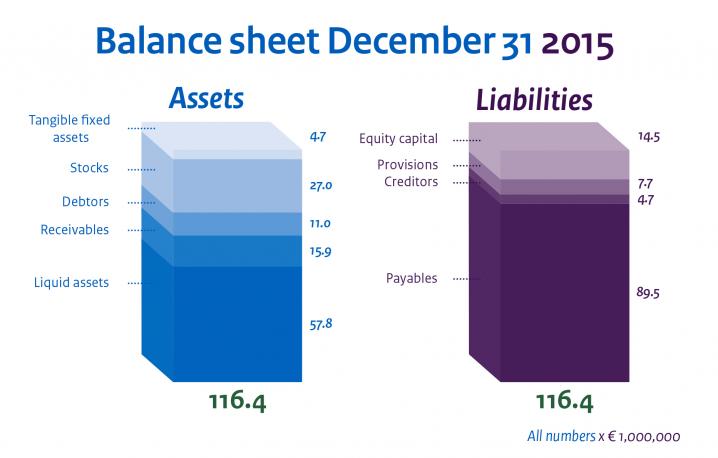 RIVM stocks mainly concern the stock in vaccines for the benefit of the National Immunisation Programme. The greater part of the debtors and receivables (€18.5 million) comprises an account receivable on the ministries and other agencies. The liquid assets represent the amount that is available on the balance sheet date to pay bills.

RIVM is allowed an equity capital of €16.8 million (5%) compared to the turnover in the last three years. Part of the equity capital is the 2015 result of €5.6 million. The provisions concern a reservation for specific future obligations which is as yet uncertain. The largest item regarding liabilities of the balance sheet is the outstanding items. This mainly concerns the assignments of clients to be carried out. €53.4 million of the debts concerns rights of ministries and other agencies. 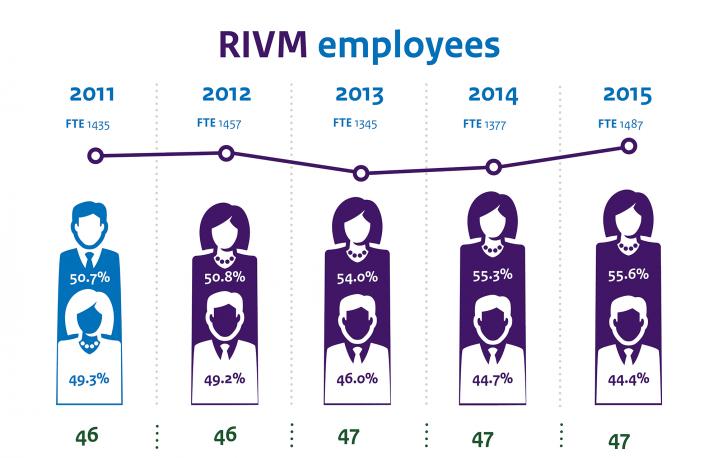 In late 2015, 1487 FTE were employed at RIVM. The increase (109 FTE) is connected with the presence of employees because of service missions (12 Ministry of Infrastructure and the Environment) and the start of the ICT shared service organisation SSC Ccampus (KNMI, 25), the conversion of external hiring to a (temporary) administrative employment and the increase in the work package carried out by private staff. In late 2015, as a result of modifications in the RIVM policy, circa 16 researchers ( PhD students) were employed at RIVM. 44.4% of the total number of employees (1728) is male and 55.6 female. Since 2012, more women than men work at RIVM; an increase that continued in 2015. The average age of RIVM employees is 47. 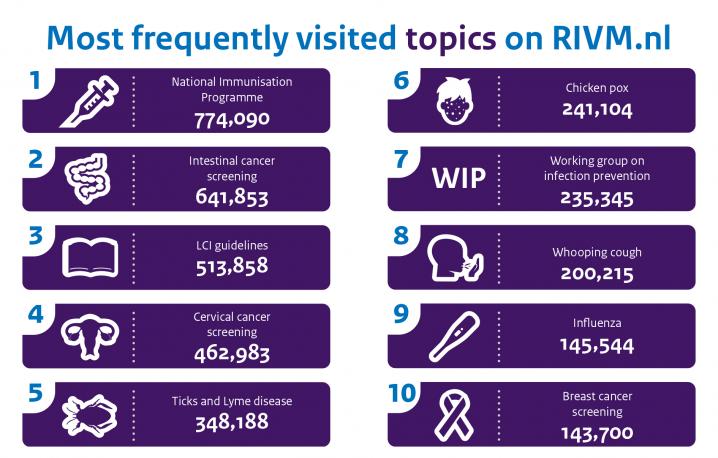 In 2015, the Dutch corporate RIVM website was visited once or more often by 6,674,598 people; an increase of 8% compared to 2014. The number of page views of 22,575,457 is comparable to 2014. With 774,090 visits, the National Immunisation Programme was again the most frequented topic, followed by the intestinal cancer screening (641,853) and the National Coordination Centre Communicable Disease Control (LCI) (513,858) guidelines. One of the reasons for this expansion is that people are increasingly able to find their way to RIVM on-line, thanks to the increased familiarity with RIVM and the expansion of the number of topics about which the website provides information.

The strengthening of international collaboration is among RIVM’s spearheads. The number of visitors of the English-language website increased by 22% in 2015 compared to 2014. The increase in the publication of news reports, the expansion of information about RIVM topics and congresses ensured a higher number of visitors of the English-language website. Social network LinkedIn also contributed to this. In addition to information pages about RIVM, the pages featuring the National Immunisation Programme, ConsExpo, NoroNet and The Dutch Food Composition Database (NEVO) drew considerable interest. The greater part of the visitors came from the Netherlands, the United States, the United Kingdom, Germany, India and France. 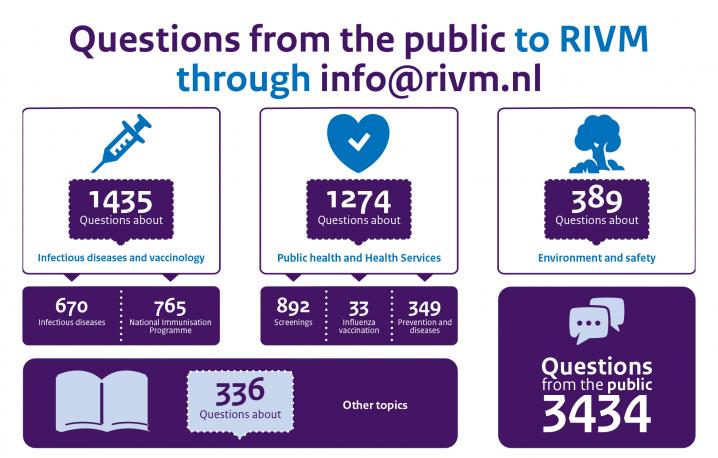 RIVM received questions from citizens and professionals through info [at] rivm.nl 5733; about as many as in 2014 (5645). The infographic provides an overview of public questions as per research area. In addition, questions are asked to RIVM through social media, other e-mail addresses and directly to RIVM employees. The overview of the number of questions asked indicates that, in addition to professionals, citizens also know how to find their way to RIVM. 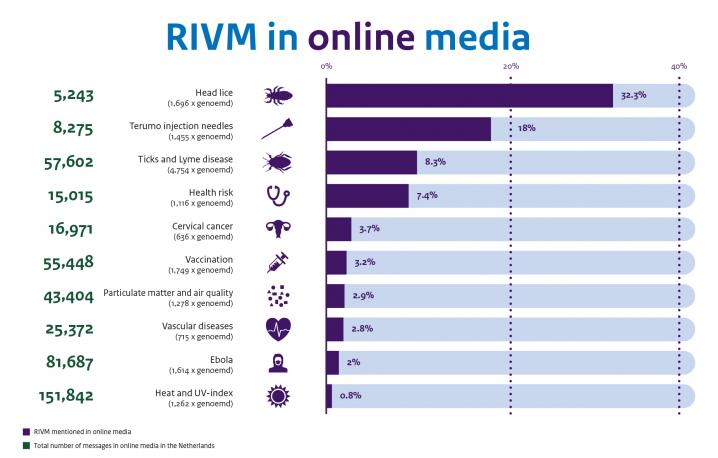 It is essential for RIVM to connect to what is currently happening in society, which is a condition for doing our job well and to function as a knowledge institute that is positioned at the centre of society. But how do we measure and become informed of what is going on in society?

We do this by monitoring the topics for which RIVM is mentioned in on-line messages and on social media.

In 2015, RIVM was mentioned in a total of 49.474 online messages. This included messages from social media, forums, blogs and digital news reports. The top 10 of topics in which RIVM was mentioned most often was compared to the total number of messages about the topic in the Netherlands.