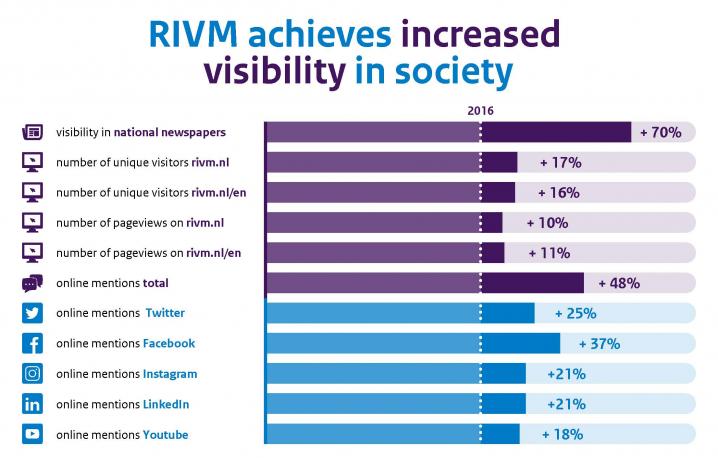 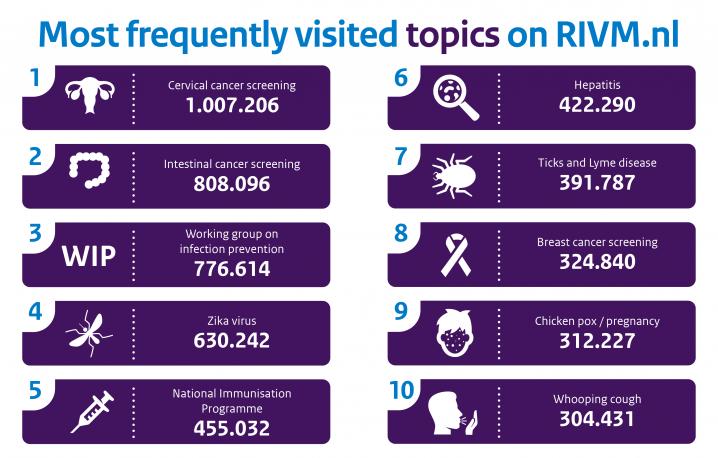 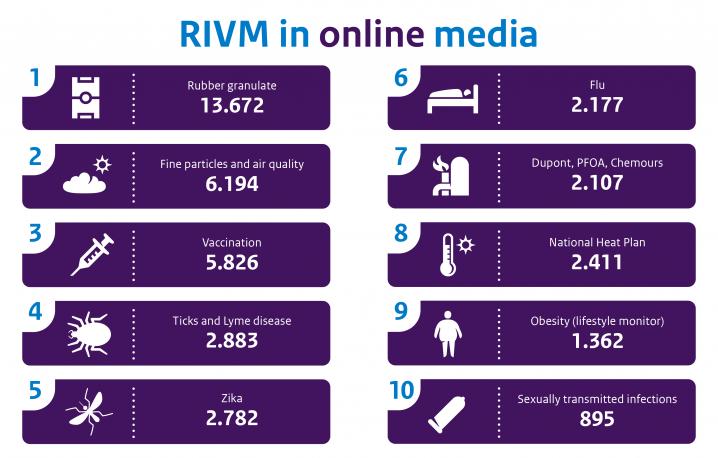 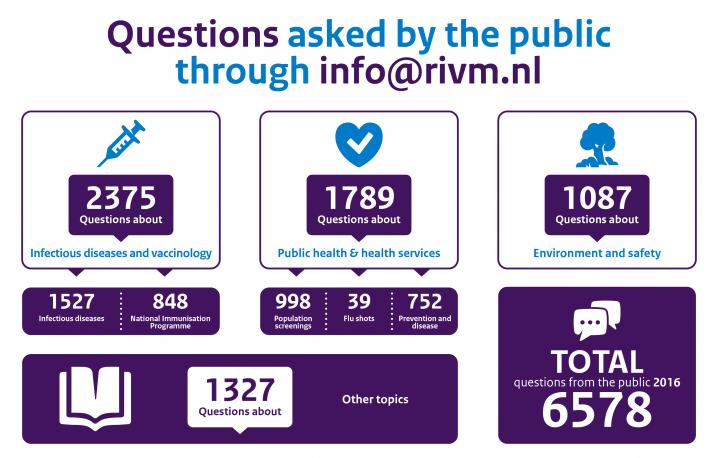 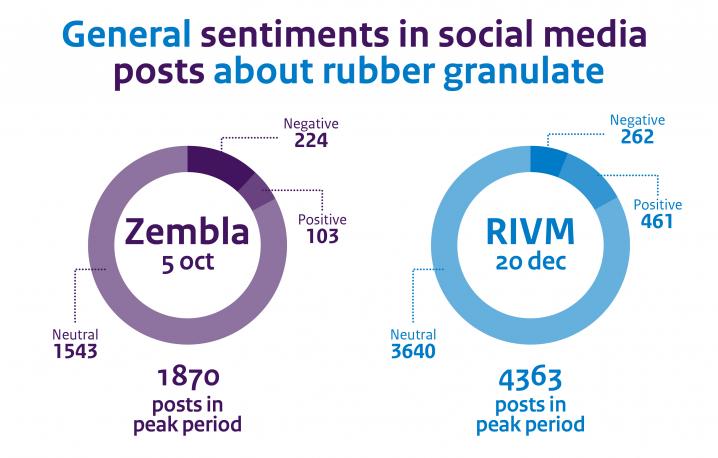 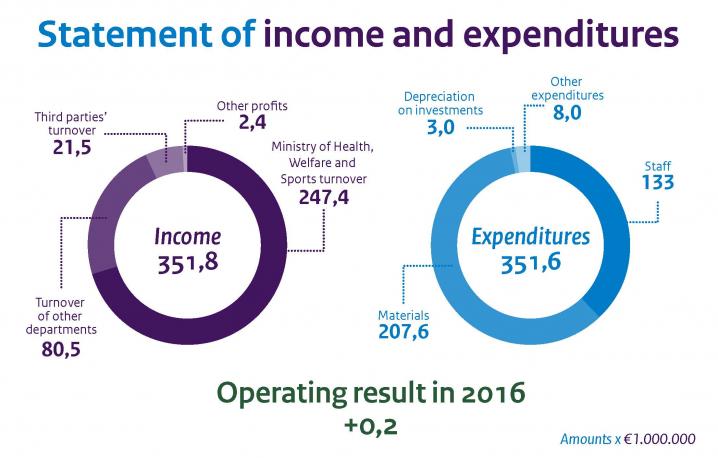 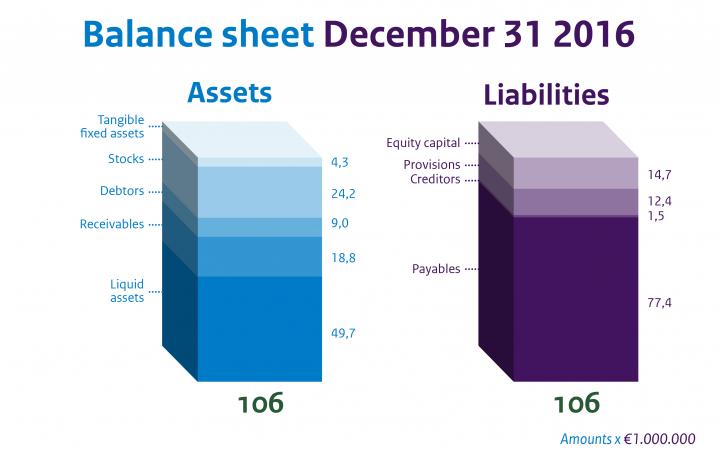 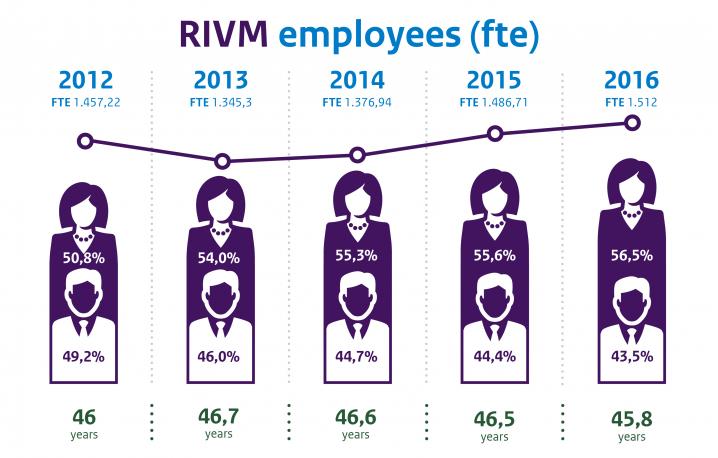 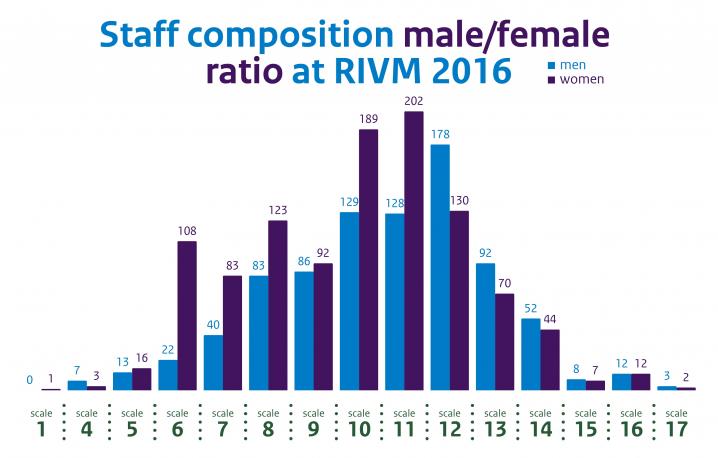 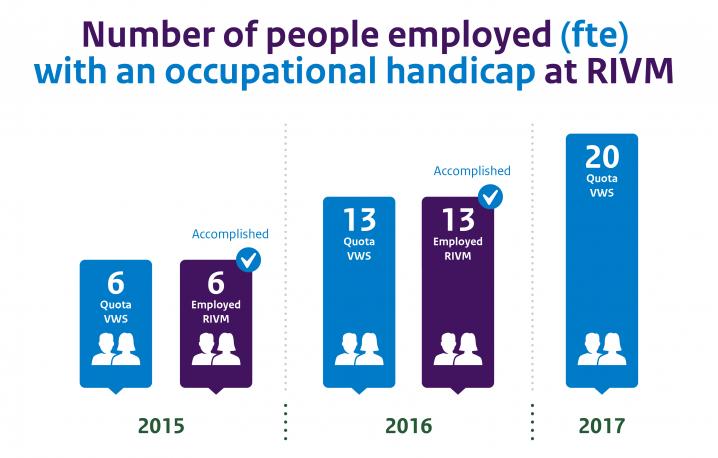 Within RIVM, steps have been taken to increase its social visibility. 19 key performance indicators (KPIs) were defined in 2016; these KPIs will be discussed in the quarterly department review to monitor trends in these key areas. The increase in unique visitors to the Dutch and English websites were specifically mentioned; this KPI indicates 7.7 million unique visitors to the website. The increase in visibility is evident from these figures.

This increased social visibility can be attributed to the fact that RIVM is considered an authoritative, trusted advisor to our stakeholders on many issues / dossiers that were active in 2016. These include the Zika virus, air quality, Lyme’s disease, the National Heat Plan and rubber granulate. In addition, RIVM has focused on transparency on all levels and questions from the press and related social media posts have been met with more conscious, targeted responses. The continually improving cooperative relationship with journalists from national media also plays an important role in increased social visibility.

The RIVM public website is considered an important resource for increasing social visibility. Since 2011, RIVM has been audited on an annual basis by the Netherlands Accessibility Foundation and is allowed to feature their drempelvrij.nl accessibility certification on the RIVM website. The number of pageviews and the number of unique visitors has increased over the past year. In order to respond more effectively to website visitor preferences, a sum of money has been set aside to study the user-friendliness for citizens, professionals and policy officers.

In recent years, RIVM has offered modules to help its employees focus on ‘citizens’. In that context, an e-learning module has been developed. A budget of €75,000 has also been made available to find innovative ways to keep citizens informed. This budget is part of the RIVM Strategic Programme.

RIVM scored lower on perceived independence in the TNO-NIPO survey. An additional exploratory study was conducted to find out more, revealing that this concept is interpreted in different ways by various groups (citizens, stakeholders, commissioning parties, RIVM). It is impossible to learn from fellow institutes in this area, since they have not assessed their perceived independence. These insights were shared during the periodic ownership consultation with RIVM’s commissioning parties and follow-up actions were defined. For instance, a conference will be organised in 2017 for the general public, in which RIVM will engage in dialogue with citizens. This topic will continue to be a priority, not least since it has been designated as a key concern in the IANPHI report. This is part of the reason why social visibility was also included in the RIVM Annual Plan for 2017.

It is essential for RIVM to connect to subjects and issues that are important in today’s society. Staying connected and relevant is the only way for us to do a good job and to be a knowledge institute that has solid roots in society. But how do we know and measure what is important in our society? For instance, we monitor which subjects are mentioned online and on social media in conjunction with RIVM. This infographic shows the top 10 topics in which RIVM is mentioned. This includes social media posts, forum posts, blogs and digital news articles.

Questions asked by the public

Compared to 2015, the number of emails has increased from 5,733 to 6,578. There was a slight decline in questions to the Centre for Population Screening and the National Immunisation Programme. On the other hand, we have seen a strong increase in questions regarding infectious diseases and Environment & Safety. This strong increase was primarily the result of questions regarding the Zika virus and rubber granulate. Regarding infectious diseases, there were 1,164 questions in 2015, and 1,527 in 2016. Regarding Environment & Safety, there were 604 questions in 2015, and 1,087 in 2016.

Initial responses after the Zembla broadcast indicated that people had many questions and concerns. They also questioned RIVM’s role in relation to this topic. As many questions as possible were identified, categorised, and published on the website in the form of a FAQ, which provided clear answers. On Friday, 7 October, Minister Schippers sent a letter to Parliament commissioning RIVM to research the possible health risks of playing sports on synthetic turf pitches with rubber granulate infill.

Several peaks in social media posting were observed during the study period. When the tyre industry announced that it would be launching its own study, an above-average number of posts were seen in response. A similar surge was seen when RIVM started its field study, taking samples from 100 football pitches.

Leading up to the study’s publication date, various media channels ran reports on the upcoming study and speculated about the possible research findings. On 19 December 2016, the NOS evening news included an item suggesting that RIVM would not provide an answer as to whether playing sports on synthetic turf pitches with rubber granulate infill is safe. This news item led to many responses on social media.

The research report was published on 20 December, along with the accompanying press release. A video briefly summarising the conclusions of the study was also posted on the website and released on social media. In December, RIVM was well prepared to handle the matter; widespread public unease was avoided due to the positive conclusion and clear, effective communication. The sentiments expressed in social media posts reflect this fact.

Statement of income and expenditures

These financial overviews are part of the annual report of the Ministry of Health, Welfare and Sport. The Netherlands Court of Auditors, which audits the ministerial annual report every year, offered its opinion to Parliament in a report. The report from the Court of Auditors may include comments on the operational management and the financial overviews of the agency as included in the ministerial annual report. See rijksbegroting.nl for the formal documents regarding RIVM as presented to the House of Representatives.

RIVM closed 2016 with a positive result of €0.2 million, which can be shown in the Statement of Income and Expenditure (profit and loss account) as follows:

The income is principally derived from commissions from within the RIVM parent ministry. This annual report offers a number of examples. RIVM also operates on behalf of the Ministry of Infrastructure and the Environment (€59.5 million), the Ministry of Economic Affairs (€11.6 million), and a number of other government bodies (€9.4 million). Projects for third parties are commissioned by both national and international parties, such as the EU and the WHO.

The expenditures (costs) necessary for the implementation of these commissions can be attributed in part to personnel and in part to materials. At the end of 2016, the total workforce at RIVM assigned to commissioned projects represented 1,554 FTE. The material costs include the building leases for RIVM accommodations, as well as the costs of arranging implementation by organisations other than the RIVM and the costs of purchasing vaccines.

The positive result that RIVM achieved in 2016 will go towards the operating reserves.  RIVM operates on a non-profit basis.

RIVM is permitted to have equity capital to the amount of €17 million, 5% in relation to the turnover in the past 3 years. Part of that equity capital is the operating result of €0.2 million in 2016. Provisions relates to a reserve held to cover specific future obligations that have not yet been defined. The biggest item under liabilities is the outstanding amounts. The majority of these refer to executory contracts involving commissions. Consequently, these outstanding amounts include €44.3 million in rights held by ministries and other government bodies.

At the end of 2016, RIVM employed a total of 1512 FTE. This is a slight increase (25 FTE) compared to 2015. RIVM is growing, so this trend is expected to continue in the coming period, considering the Strategic Personnel Plans of the Centre and Staff Departments. At the end of 2016, there were 1713 staff members working at RIVM. 43.5% of these employees were male and 56.5% were female. The percentage of women working at RIVM has increased slightly again. The average age of RIVM employees is 45.8 years. This represents a decrease compared to 2015, when the average age was 47 years.

The male/female ratio at RIVM is shown above, grouped by pay scale. The gender distribution of the total staff complement was 44% men and 56% women. This means that RIVM employed more women than men in 2016.

Number of people employed (fte) with an occupational handicap at RIVM

In 2023, RIVM must have appointed 50 people as direct members of staff or external employees for an average of 25.5 hours per week. Most of these appointments involve hiring staff through the Public Employment Service or a secondment agency. This infographic shows that RIVM has met the goals set for 2015 and 2016 and is on track for reaching the target goal set for 2023.